The first recorded game that the RAF played as a representative rugby team was on 26 February 1919 when they lost 0-10 to the Royal Navy Depot Devonport side at Richmond. This was a warm up game for the tournament to compete for the King’s Cup. Caps were not awarded during the King’s Cup

On 15 January 1920, a meeting was held in the Air Ministry in London to form the Royal Air Force Rugby Union. There is written evidence from the RAFRU second general meeting held on 16 July 1920, six months after its formation that mentioned playing kit and the awarding of caps.

2 X RAF College Cranwell caps. The Cap with no badge belonged to C W Gore who through his years in the RAF rose to the rank of Air commodore. The cap with badge and 1920-21-22 dates belonged to Edward Bernard Coventry who, on the 29th September 1923 lost his life at the age of 21 during a routine training flight (PS)

Four RAF Rugby Caps belonging to one lucky owner. The N.A 1961 cap was awarded to HJC Brown who was capped by the RAF on 8 occasions. In 1962he was called up for the British and Irish Lions Tur of South Africa. Name on Tape  F/O/ H J C Brown. Makers label RW Forsyth, Edinburgh and Glasgow. The 1922-1923 Cap belonged to Edward Bernard Coventry (see college caps above) (PS) 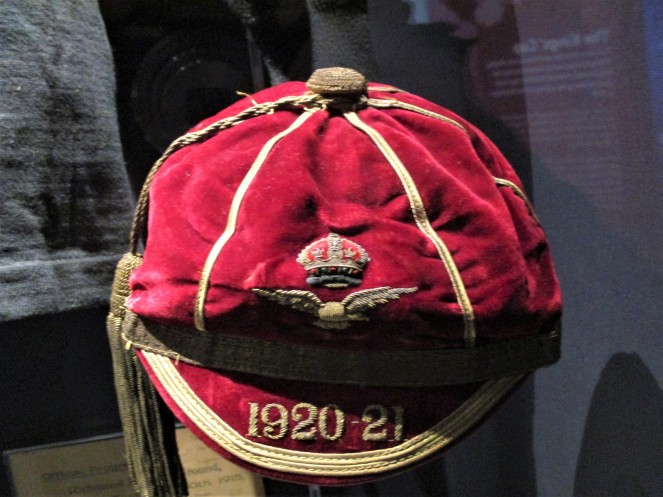 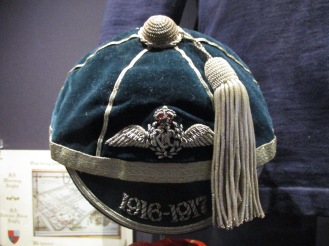 Three caps on display in the World Rugby Museum (Feb 2018). The 1920-21 Cap was awarded to Cyril Lowe who played rugby for England and held England’s international try scoring record for over sixty years. He was a First World War flying ace credited with nine victories, and supposedly the inspiration for W. E. Johns’ character “Biggles”. The blue cap is a Royal Flying Corp Cap (WRM)