In New Zealand, there are 14 provincial teams that compete for the ITM Cup. This is the successor to Division One of the country’s former domestic competition, the National Provincial Championship (NPC).

Auckland Rugby Union Cap 1907 awarded to Pat “Nimmo” Walsh. Whilst playing in the Auckland  Competition in 1908 he received a cablegram from J.J.Giltinan inviting him to join the Australian Kangaroo (Rugby League) tour of 1908/1909 (PW) 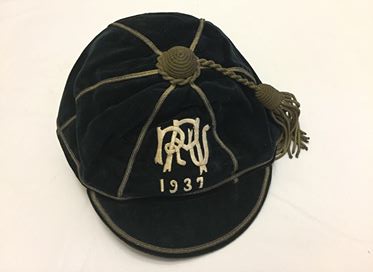 Otago Rugby caps awarded to William Strong who played for Otago in 1884 and 1886, as the cap embroidery also supports.

William played for the Pirates club in Dunedin. He was born on the 12th November 1865 and died in Christchurch on the 10th August 1950.

Len McKay represented Otago Rugby in 1903 from the Alhambra club. McKay was known as a quick wing who also goal kicked.