Velvet caps were worn in the late 1830s by senior boys, allowed to ‘follow up’ in matches on the Close. They were shaped like smoking caps or jockey’s caps and were brought in as a more practical form of headgear than the top hats which were usually worn and which were expensive to replace if crushed on the field of play. In the autumn of 1839, Queen Adelaide, widow of William IV, visited Rugby and School House boys lined Old Quad wearing caps in the Royal colours of crimson velvet with gold tassels. That afternoon she watched the School House versus School match on the Close, with the former resplendent in their fine headwear, so becoming the first team to wear a uniform for football.  In a violent and then fairly anarchic sport, it was clearly an advantage to be able to identify one side from the other. Soon after, other houses adopted velvet caps, mostly designed by W. Crealock, and they became a mark of excellence. C.H. Chambers’ pen and ink drawings of 1845 depict cap holders in action with the younger boys, not yet permitted to ‘follow up’, standing in goal with their top hats. 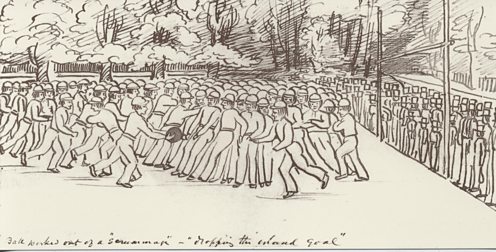 Rugby School’s caps have remained in house colours, though not all houses wear their crests on their caps, and are awarded for life. The colour and design of the braid came more recently and depended on how many times in a row the wearer’s house had been cock house. Up to the early 1920s it was the custom to embroider the record of the owner’s football career on the silk lining of the cap. All matches, dates and scores were included with the player’s name in the middle. Players still wear their caps before XV matches and it is still the highest honour in the sport to be ‘capped’ for one’s country.